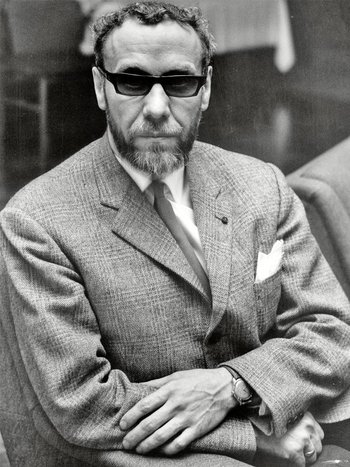 Sven Hassel (real name Børge Willy Redsted Pedersen, 19 April 1917 – 21 September 2012) was a Danish author of fourteen World War II novels based around the experiences (both tragic and comedic) of 2 Section — a unit of the 27th Penal Panzer Regiment, made up of court-martialed soldiers and former inmates of concentration camps and prisons, conscripted as expendable Cannon Fodder for the Nazi cause.

The novels are ostensibly told from the point-of-view of the author, though some chapters are in third-person and cover other characters. Sven Hassel claims to have based them on his service in the Wehrmacht, during which he served on every front except North Africa. A journalist however claimed Hassel spent the war entirely in Denmark as a member of a collaborationist police unit, and his stories are based on conversations with ex-Dutch SS soldiers thrown into prison with him afterwards. Certainly his novels are not taken seriously by historians, containing many inconsistencies and exaggerations. Nevertheless with their unstinting mix of action, horror and Black Comedy they have proved quite popular, being translated into eighteen languages.

Although the members of 2 Section vary from novel to novel, the main characters tend to be:

The novels contain the following tropes: