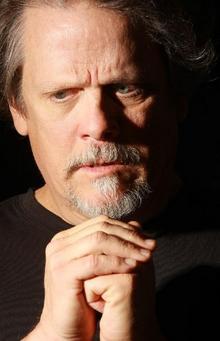 In a world filled with misery and uncertainty, it is a great comfort to know that, in the end, there is a TV Tropes page with my name on it.

Keith Szarabajka (pronounced "sharah-bike-ah", it means "grey fable" in Polish) (born December 2, 1952 in Oak Park, Illinois) is a short, scary man who has made a career out of talking softly for lots of cash.

An American character actor by trade, he did an exhaustive amount of genre work in the '90s, appearing in any cult show you care to name. As he got older, he transitioned into VA, and has kept very busy.

The Mark Sheppard of the nineties, the voice is recognizable to many, even if his name is a blur. Most viewers know him from a supporting role in the 1985–89 cult hit The Equalizer, as Holtz from Angel, and Det. Stevens (a Harvey Bullock expy) in The Dark Knight. As chance would have it, he later voiced Bullock in the Telltale series of Batman games. He also had a recurring role from season 11 of Supernatural as Donatello Redfield, a Prophet of God.

Has a distinctive character voice which alternates between three modes: nasally, Marlboro Man, and Satan.

You have Captain Diomedes.