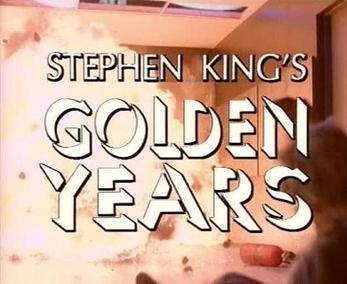 Run for the shadows in these golden years...
Golden Years (also known as Stephen King's Golden Years) is a 1991 television miniseries created and written by Stephen King.
Advertisement:

Harlan Williams is an elderly janitor at Falco Plains, a government research laboratory in New York State. One day he finds himself caught in a particle accelerator experiment gone awry, exposing him to a mysterious, luminescent dust. Harlan survives, but his ordeal is far from over — not only are his wounds mysteriously healing, but he has begun to age in reverse. Soon Harlan finds himself the focus of a cross-country manhunt as certain elements of the government try to stop at nothing to learn the secrets of his condition.