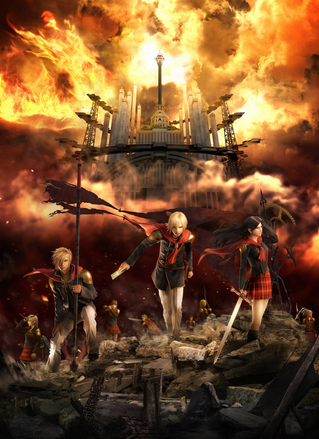 For them, the path was not chosen... They chose their path. Yes, not knowing the fear of death. Having never learned the fear of confronting it.
When nine and nine meet nine,
the depths of reason shall stir.
When the seal of creation is broken,
a voice like thunder shall sound,
and thou shalt know—
we have arrived.
Advertisement:

A game in the war-declaringly popular Final Fantasy series and second entry of the Fabula Nova Crystallis: Final Fantasy sub-series, Final Fantasy Type-0 (originally known as Final Fantasy Agito XIII until late January 2011) is an Eastern RPG originally released for the PlayStation Portable. As with the other FNC games (the XIII trilogy), Type-0 shares some concepts with the other games but are entirely independent of each other. The game was originally bound for cellphones, but this was changed early in development. The PSP original was released in Japan on October 27, 2011, and never saw a stateside release (save for a fan translation project

. Oddly, after the original blog was deleted, someone else took it and made new posts, while saving the old ones).

In the land of Orience, there are four nations: the Dominion of Rubrum, the Milites Empire, the Kingdom of Concordia, and the Lorican Alliance. Each domain has a crystal, and each powers their respective military forces, which are trained at four Peristylia (a combination of military academy and Wizarding School), each represented by one of The Four Gods. The countries have been at peace, honoring the Pax Codex between them.

However, the expansionist Milites Empire, led by High Commander Cid Aulstyne, has found a way to shatter the crystals and has set their sights on Rubrum and the Vermilion Peristylium. Twelve cadets of the elite Class 0 somehow retain their powers from the crystal pact, and it's up to them (and two additional members) to save their homeland and become the Agito, the savior of the world.

Playing the game again after completing it unlocks additional scenes and missions and a secret ending.

An Updated Re-release has also been made for the PlayStation 4 and Xbox One, which finally allowed the game an international release in 2015 (March 17 in the USA, 19 in Japan, and 20 in Europe, along with a Steam release on August 18), bundled together with a voucher for the Final Fantasy XV: Episode Duscae demo. Due to its Bloodier and Gorier nature compared to the rest of the franchise, Type-0 HD is the first Final Fantasy game to receive a "Mature" (17+) rating in the USA's ESRB system, and "C" (15+) for Japan's CERO.

An alternate companion game, Final Fantasy Agito, has been released for iOS and Android, taking place in a different timeline to that of Type-0 but with the same setting.

open/close all folders
A to C
D to F
G to I
J to L
M to P
Q to S
T to Z
Walk on, wandering souls
For your respite we pray
Let our humble song clear your hearts of dismay
Rekindle the flame in your souls and set you free
So walk on, and become the light that guides the way...
Feedback

Example of:
War Is Hell