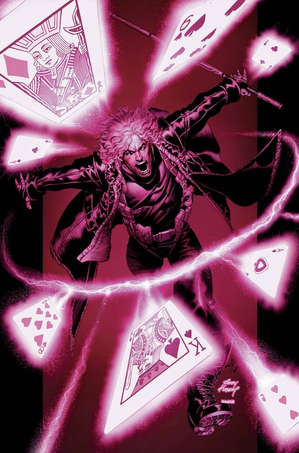 "52-card pickup is a staple of juvenile humor. But when the deck slices and dices, it's no laughing matter."
— Cheshire Cat, American McGee's Alice
Advertisement:

Many Card Sharps may see their cards as useful tools, but this goes one step beyond that. Cards can, when thrown by the right hands, become a deadly weapon.

How (and why) someone is using cards as a weapon varies: it can be some form of Applied Phlebotinum, magic, control of kinetic energy, or even because the characters are just that good. Or they're a Paper Master and that's just what happened to be on hand.

They always make it look so easy in fiction, even though it's not so easy to throw a card this way in reality. (Seriously, try it the way any of the names below do so and see if it's as easy.)

May include boomerang powers and definitely causes Paper Cutting. And don't forget that they typically carry a clip of 55 of them (the 52 plus two jokers and the company card) in a case roughly the size of a pack of cards.

Very often overlaps with The Gambler, for obvious reasons, and Monster Clown, for not-so-obvious ones. In Japanese works, may also overlap with Phantom Thief.

The user might be, but isn't necessarily, a Card-Carrying Villain (sorry). Also likely to be a Card Sharp (with sharp cards), so the use of such a distinctive weapon may be the killer's Calling Card (we can do this all day). If they're so improbably good that the full house won't shut up about it, they're The Ace. (Yeah, we know, our card is marked. We can deal with it.) May or may not have Playing Card Motifs to go along with this.

Not to be confused with Arms Dealer or The Aggressive Drug Dealer. For cards that are a Portent of Doom, see Dead Man's Hand. Cards of Power is when the cards themselves are powered.