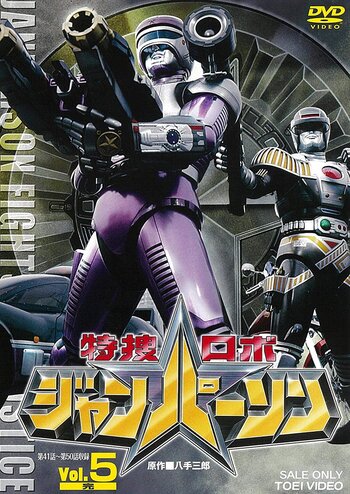 Janperson and Gun Gibson, are about to shoot you.
"Janperson, Fights for Justice!"
Advertisement:

Tokusou Robo Janperson is the twelth entry in the Metal Heroes franchise, airing from 1993-1994

Sometime in the not so distant future, scientists in Tokyo create a robot to bring lethal justice to their lawless streets. However, this robot, MX-A1, goes haywire and turns on its creators. Rather than allow him to be scrapped, his co-creator Kaoru Saegusa rebuilds him into a new robot hero with human emotions. Now Janperson, our hero, patrols the streets of Tokyo to eliminate the threat of its four main crime syndicates. Later, he is joined by fellow robot Gun Gibson, who was originally designed to kill him.