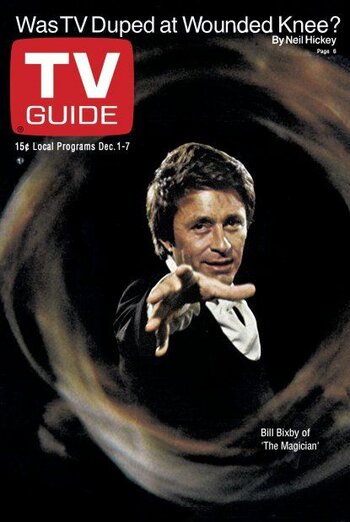 The Magician is an American television series that ran on NBC during the 1973–74 season. It starred Bill Bixby as stage illusionist Anthony "Tony" Blake, a playboy philanthropist who used his skills to solve difficult crimes as needed. In the series pilot, the character was named Anthony Dorian; the name was changed due to a conflict with the name of a real life stage magician.

Blake was a professional stage magician who used his skills to solve crimes and help the helpless. Years earlier, Blake had been in prison on a trumped-up espionage charge in an unnamed country in South America. He discovered a way to escape with his cellmate, which began his interest in escapology. The cellmate died and left him a fortune. The escape, apparently followed by exoneration of the false charges that had led to it, led to Blake's pursuit of a career in stage magic, which made him famous. He never forgot his unjust imprisonment, and it motivated him to seek justice for others. Blake frequently received assistance from acerbic columnist Max Pomeroy, Max's brilliant but wheelchair-bound son Dennis, his assistant and pilot Jerry, and later Magic Castle owner Dominic.

Tropes used in The Magician: