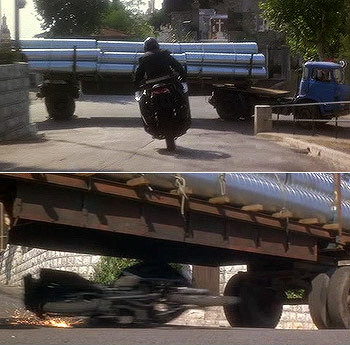 "A semi has about four feet of clearance under it. Sliding beneath on a motorcycle is possible, but risky. Too low and the pavement will grind you to a pulp. Too high, and any part of your body that hits the trailer will no longer be a part of your body."
— Michael Westen, narrating the dangers of this trope before doing it himself, Burn Notice
Advertisement:

When a chase scene involves motorcycles, there seems to be only one way the chase can end. The motorcycle will invariably come across an intersection with a large semi towing a large trailer at the exact moment the trailer is blocking the entire intersection.

If it's the hero on the motorcycle, who will often be chased by cops in police cars, then the hero drops to his side and slides safely underneath the semi, while the cops blindly slam into the trailer without stopping. This is possible but extremely dangerous; misjudging the slide can easily result in decapitation by truck or in the rider's low-side leg being ground into paste.

If the hero is being chased by motorcycles instead, he will just barely zip around the truck, while his pursuers take the slide and are taken out of the race.

Note that motorcycle riders unfortunately used to be advised to try something similar to this if they realize they can't avoid being in a collision. The goal of this maneuver is (incorrectly) to stop in the shortest distance possible, taking a very severe case of road rash in favor of slamming into the back of a stopped vehicle or other obstacle. In real life, stopping with your brakes while remaining upright will bring you to a stop in a much shorter distance and in less time. Intentionally lowsiding is, unfortunately, still passed on from old bikers who have never used the brakes to their fullest extent. This is especially true on newer bikes equipped with ABS. Stereotypical biker leather came about as a means of protection from road rash in case of an accident, and back in the day bikes and road surfaces may have been poor enough to merit this maneuver.

See also Instant Convertible for when a car tries to do the same. Has nothing to do with the myth of Mew being under the truck in Vermilion City. Not to be confused with throwing someone under a bus, metaphorically or otherwise.