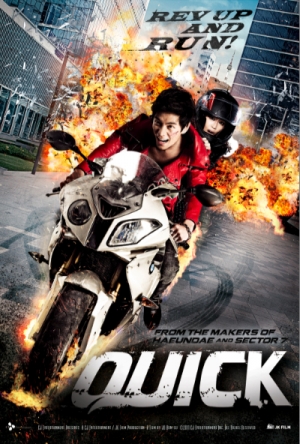 Seoul, 2004. A group of bikers are joy-riding through the streets, while their leader the teenage Han Ki-su is tearfully berated by girlfriend Chun-shim for scorning her. The biker Kim Myung-shik, who is attracted to Chun-shim, watches dolefully. A reckless stunt by Ki-su in heavy traffic causes a pile-up. Han-shi executes a perfect bike jump over the pile-up and rides off into the night.

Six years later, Ki-su is working as a bike messenger. After delivering a package to an office, the building blows up just after he leaves. Ki-su doesn't think his package was connected to the blast. Ki-su is later asked to drive Ah-rom, the lead vocalist of girl group OK Girls, to a televised stadium concert that she is late for. To his surprise, he finds that she is actually Chun-shim who is still angry at how she was treated years earlier. He offers her his helmet, unaware that it's been switched for an identical one rigged with an explosive. Ki-su receives a phone call and is told to deliver three packages already stowed in his bike, with a 30-minute delivery time for each package. If they exceed the time limit or if Chun-shim tries to take off the helmet or if Ki-su goes more than 10 metres from Chun-shim then it will explode. Meanwhile the police, led by Detective Seo and NPCC team leader Kim examine the CCTV tape in the building that exploded and believe that Ki-su is potentially the bomber. Ki-su delivers Chun-shim to the concert just in time where she performs in the helmet. The two of them start to make the deliveries, while being hunted by the police and trying to solve figure out who is responsible for the bombings while driving between Seoul and Incheon.