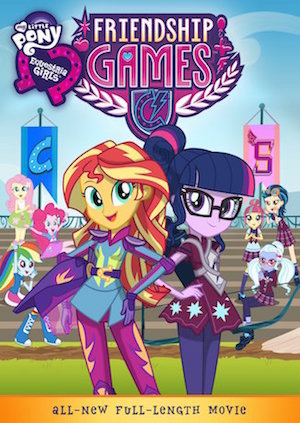 Back-to-Back Badass Bookworms.
"Take my hand, Twilight. Let me show you there's another way... just like someone once did for me."
— Sunset Shimmer
Written by Josh Haber

My Little Pony: Equestria Girls – Friendship Games is the third movie in the My Little Pony: Equestria Girls line of films. The film had its premiere airing on Discovery Family on September 26, 2015, and its home media release was on October 13 of that year. Unlike the previous two installments, this one was not given a limited theatrical release.

Set during the events of the Season 5 finale, the plot centers around the Canterlot High Wondercolts facing off against the Crystal Prep Shadowbolts in the eponymous Friendship Games, which include archery, speed skating, and motocross. Among the ranks of the Shadowbolts is the human incarnation of Twilight Sparkle, who was previously seen in The Stinger of Rainbow Rocks studying the magical goings-on at Canterlot High.

As with Rainbow Rocks, Hasbro produced a series of prelude shorts to promote the movie. They have their own page, My Little Pony: Equestria Girls – Friendship Games Shorts.

was released on the official Equestria Girls website. (Tropes for this short at the bottom of the page.)

This movie is followed by My Little Pony: Equestria Girls – Legend of Everfree, the fourth film in the franchise.

A short blooper reel featuring various scenes from the Friendship Games movie with the characters goofing off, lines being flubbed, and one Overly Long Gag involving Fluttershy's bag.

A short blooper reel featuring various scenes from the Friendship Games movie with the characters goofing off, lines being flubbed, and one Overly Long Gag involving Fluttershy's bag.