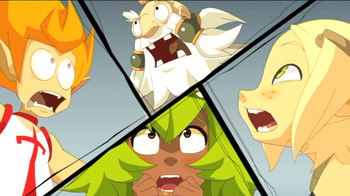 The villain of the day has dropped a bombshell revelation. To show the reaction shots of all the protagonists at once, the screen is split into sections, with a reaction shot in each section. The reactions may show up one at a time and accompanied by a clang sound effect.

Alternatively, the split screen may show the faces of all of the protagonists as they act in unison. This is especially popular in shows with Combining Mecha, Colors or Powers. Just about every Shōnen series does this when a particularly harsh blow lands. To be fair, most anime where there is any sort of competition will show something like this.

A typical Split Screen is just two people and a thin vertical divide between the two halves. The Split-Screen Reaction often has stylized divisions at strange angles. It may not even be a true "split", but a series of picture-in-picture bubbles that pop up. (Also see Odd-Shaped Panel.)

Characters with Medium Awareness may be able to use the split to interact with the other characters where it wouldn't usually be possible.

When parodied, it's usually part of an overdose of Anime Effects, resulting in Mundane Made Awesome.

The KND and the villains react with shock when Knightbrace announces his intentions to destroy the Rainbow Munchies cereal.

The KND and the villains react with shock when Knightbrace announces his intentions to destroy the Rainbow Munchies cereal.