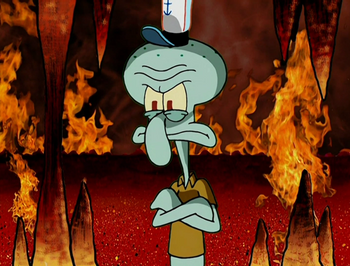 "Oh, puh-leez. I have no soul."
"The roaring fire behind her... made her glow, as if she'd been sent from hell."
— Wax
Advertisement:

When a character is plotting something wicked, flames often appear in the background. The fire often comes out of nowhere, although the character may actually stand in front of a burning object for the same effect. Either way, it is simply meant for dramatic effect. The use of this trope can vary on the Sliding Scale of Seriousness Versus Silliness: it can be used in a serious way, to make a character seem legitimately intimidating, or it can be used in a silly way, due to its somewhat over-the-top nature.

The character may do an Evil Laugh while the flames appear.

Sub-Trope of Evil Is Burning Hot.

Compare Background Halo (that is, the evil variant involving horns), Battle Amongst the Flames, Fireball Eyeballs, Out of the Inferno, and Devilish Hair Horns. Contrast Holy Backlight.

Not to be confused with having demonic ancestry.