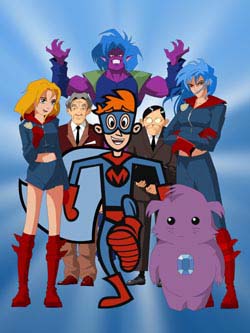 "Hey! (Hey!) Look! (Look!) Out in the streets!
Don't you see the man is Kappa Mikey!"
Advertisement:

A 2006-to-2008 Fish out of Water Work Com Nicktoon animated in-house at Animation Collective, and Nicktoons Network's first original cartoon. The show blends tropes from both American cartoons and Japanese cartoons. Kappa Mikey is about American teenage actor Mikey Simon who wins a contest giving him a role in the flagging anime series Lily Mu, and ends up making it a hit. Lily Mu is a show that parodies, and includes, more Superhero and Shōnen tropes than would fit in this article, and are all the more appropriate to contrast with the ordinary "real world" in the main show.

After moving to Japan, Mikey constantly finds himself in conflict with both the culture of his new homeland, and with his cast-mates. Episodes usually revolve around Mikey and his friends learning An Aesop as they deal with off-screen problems that are impairing their acting performance. Said problems are often rather bizarre, like the time a rapping, self-aware sock puppet threatened to upstage Lily on a magazine's "Most Beautiful People" list. An in-joke for the 4Kids Entertainment fans exists where most of the voice actors also worked on their anime dubs back in the day.

The initial response from the show's premiere was met with less-than-positive reviews, and there is still a large body of haters (professional animators, actual otaku, That Dude in the Suede, in particular). That being said, it has accumulated something of a cult following in the years since it went off the air. It's generally agreed, if one looks past the attempted parody aspect, it's a decent and amusing animated workcom series if nothing else.

The show was available on iTunes until it was quietly taken down around 2015. It is also succeeded by one Spinoff mini-series that is available on YouTube and has-you guessed it- never seen the light of day in United States television.

Now with a Characters page. Any tropes specific to an individual character should go there. Also a Recap page.

Engineer 1: How do you think the network is going to feel about all that farting?
Engineer 2: Are you kidding? They're going to love it!
—The very last lines in the show.
Feedback

"When Life Gives You Lunch Meat".

"When Life Gives You Lunch Meat".