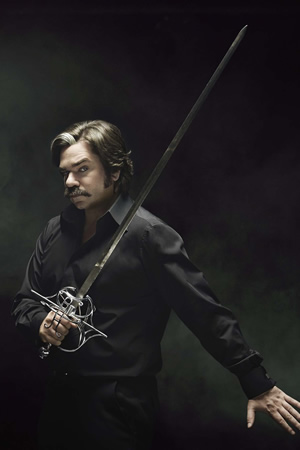 Steven Toast
"Hi Steven, this is Clem Fandango. Can you hear me?"
"Yes I can hear you, Clem Fandango."
—Every Episode
Advertisement:

A Brit Com written by Arthur Matthews and Matt Berry and broadcast by Channel 4 in which the latter plays Steven Toast, a Large Ham middle aged actor who spends more time dealing with his bizarre life and problems off stage than performing on it. Toast constantly struggles to hold down a job due to his self-centeredness and obliviousness, which lead to frequent gaffes and mishaps that upset those around him. He sustains himself by starring in a universally-reviled play and doing humiliating dubbing work, but spends most of his time arguing with his agent Jane Plough (pronounced "pluff"), chatting with his eccentric, permanently dressing gowned flatmate fellow actor Ed Howzer-Black, and facing off against his arch enemy and rival actor Ray Purchase. He also hangs out at The Colonial Club and wrestles with his complicated love life, which involves dealing with his ex-wife, sleeping with Mrs. Purchase, and frequently a Girl of the Week.

A Sequel Series, Toast of Tinseltown, was released in 2022, now being aired by The BBC (via their BBC2 channel).

Toast of Tinseltown provides examples of: