Series / To the Manor Born 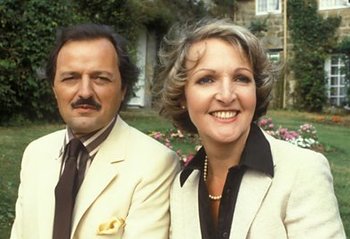 Pictured: Richard and Audrey.
To the Manor Born was a Brit Com created and written by Peter Spence that ran for three series from 1979-81 and a Christmas special in 2007. Upper-Class Twit Audrey fforbes-Hamilton (Penelope Keith) is forced to sell Grantleigh Manor, the Big Fancy House which has been in her family for countless generations. To her horror, the historic estate is bought by Richard DeVere (Peter Bowles), a Nouveau Riche supermarket magnate. To make sure he doesn't make a mess of things, she moves into a lodge in the front yard.
Advertisement:

As the series went on, Audrey became a Defrosting Ice Queen and developed a Slap-Slap-Kiss relationship with Richard. They had a Last-Minute Hookup in the Grand Finale. A one-off revival episode was aired in 2007.