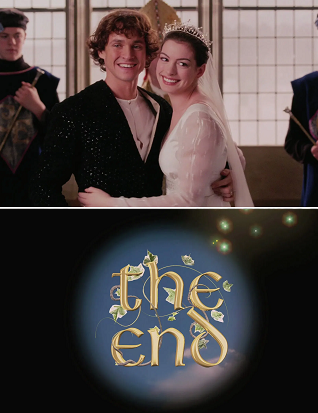 "...[It's] not like the telenovelas I grew up watching. The wedding isn't the end. Our story is just beginning."
— Jane Villanueva, Jane the Virgin
Advertisement:

For all the drama and mishaps associated with them in fiction, weddings are supposed to be a happy affair. So closing a story with a wedding is common — it's a fun celebration for the characters who have suffered through the show's twists. And since They Do, it ties up the Romance Arc for the Official Couple and promises a new life chapter for the newlyweds, especially if children are on the horizon. Happily Ever After!

Though Wedding and Engagement Tropes will abound, the wedding will usually go well in the end, as this is likely an indicator of Happily Ever After, but not always — it may be someone other than the leads getting married, or the wedding may end unhappily. Ending a war story with a Wartime Wedding after all the fighting is usually a Bittersweet Ending. While this trope usually applies to entire standalone works, it can also be used to give closure to seasons (or installments analogous to them).

Supertrope to Weddings for Everyone and Wedding Bells... for Someone Else. A Wedding Finale may overlap with Wedding Episode if the entire final installment or episode is centered around a wedding. May be part of a Grand Finale. Overlaps very often with Sealed with a Kiss. Can also overlap with a Dance Party Ending if they show the characters dancing at the wedding. May overlap with Moving Away Ending if it either requires moving away from the country or occurs just before the move.

Season 6 of Winx Club ends with Daphne and Thoren getting married.

Season 6 of Winx Club ends with Daphne and Thoren getting married.