Series / Descendants of the Sun 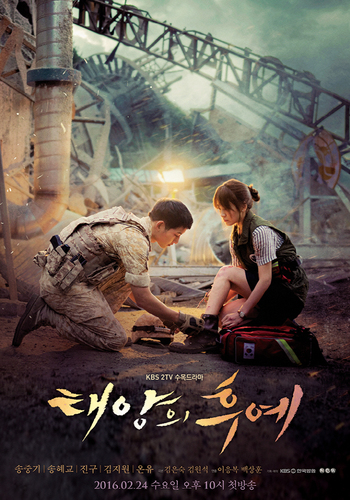 You are my everything...

Descendants of the Sun (태양의 후예, also known as Descended from the Sun) is a 2016 Korean Drama which aired from February 24 to April 22 on KBS 2. It stars Song Joong-ki as Captain Yoo Shi-jin, Song Hye-kyo as Kang Mo-yeon, Kim Ji-won as Yoon Myung-joo and Jin Goo as Seo Dae-young. The series was an international hit, attracting intense interest across Asia and even receiving a BBC news article.

The drama tells the story of special forces Captain Yoo Shi-jin who falls for Doctor Kang Mo-yeon while visiting the hospital. Their relationship is over before it really began due to the conflict between their jobs - a soldier who kills to protect people, and a doctor who saves lives no matter who they are. Six months later, they fatefully reunite in the fictional war torn country of Uruk, where they are forced to work together.

As of August 2019, a Chinese adaptation is in pre-production while the Vietnamese version aired in 2018 with 48 episodes, which was also released via Netflix. In February 2020, the Filipino version aired, but further principal photography was halted due to COVID-19 concerns. But as of November 2020, it has resumed airing.

In addition, a sequel series is being developed.

Descendants of the Sun contains examples of: