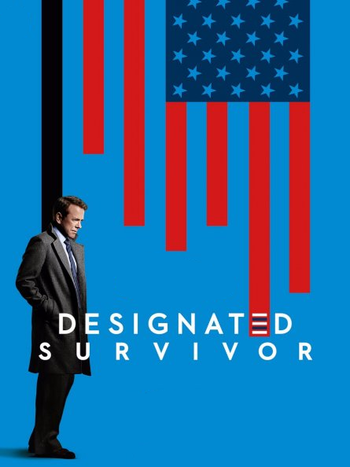 "A designated survivor is an individual in the presidential line of succession, usually a member of the United States Cabinet, who is arranged to be at a physically distant, secure, and undisclosed location when the President and the country's other top leaders are gathered at a single location."
— Definition according to Wikipedia
Advertisement:

Designated Survivor is a 2016 terrorism/conspiracy drama airing on ABC.

Kiefer Sutherland plays Tom Kirkman, the idealistic but unassuming United States Secretary of Housing and Urban Development. On the day of a State of the Union he is informed, in short order, that: the president has removed all mention of Tom's new housing programs from the speech, after the SOTU the president will announce Tom is being Kicked Upstairs as the new Ambassador to the International Civil Aviation Organization, and that Tom has been tapped to be the White House's Designated Survivor — kept away from the event itself in order to preserve the line of succession in the event of an attack killing everyone else, but also meant to simply keep him out of the way. Thinking little of it, he and his wife Alex (Natascha McElhone) watch coverage of the session on television... thus witnessing the House of Representatives getting blown up in an act of terrorism.

Forced to deal with such immense responsibility in the face of national panic, it's up to Tom — now President of the United States Thomas Kirkman — to help hold the nation together. Meanwhile, FBI Agent Hannah Wells (Maggie Q) takes the lead on the investigation of the attack, discovering a conspiracy that goes much deeper than it seems.

Due to good ratings/reviews, the show was renewed for season 2 with the first episode airing on September 27, 2017. The latter half of Season 2 began airing on February 28, 2018. The show was canceled after two seasons on May 11th, 2018, with its series finale to air on May 16th.

On May 17, 2018, eOne announced that they were in discussions with other networks to have it air on another TV channel or over a streaming service. Netflix picked up the show, with the show becoming a true "Netflix Original" in June 2019 (series one and two were also on Netflix, but were only considered Netflix Originals outside of North America). The entirety of the show's third and final season was released onto Netflix worldwide on June 7th, 2019. While the show was complete, it was mentioned before that the cast and crew are open to do the show again in the future, but they're entirely busy with new TV/Film projects.

A South Korean version of the show titled Designated Survivor: 60 Days aired in July 2019 there (and in some other countries on Netflix).