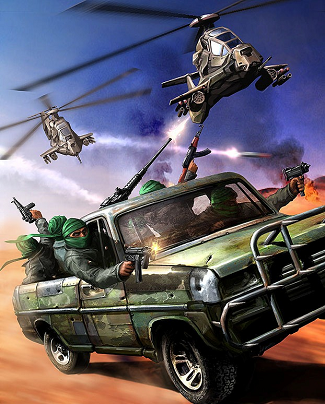 "You have murdered our women and our children and bombed our cities from afar like cowards, and you dare to call us terrorists?! Now, we have the ability to strike back at our enemies. Unless you, America, pull all military forces out of the Persian Gulf area, immediately and forever, Crimson Jihad will rain fire on one major U.S. city each week, until our demands are met."
— Salim Abu Aziz, True Lies
Advertisement:

A Sister Trope to Western, African and Far East Asian Terrorists, Middle Eastern Terrorists are terrorists who are based in the Middle Eastnote It's the transcontinental region of Western Asia between Southern Europe, North Africa and South Asia to carry out guerrilla and terrorist attacks against domestic/foreign governments and interests alike. They can be based in other places, but the majority of the manpower is made up of nationals who are from the Middle East. They can be used as mooks, usually working alongside other types of terrorists and criminals, as long as they share the same objectives and interests.

In fiction, they mostly operate under Terrorists Without a Cause, La Résistance, or Knight Templars, or are placed under Your Terrorists Are Our Freedom Fighters. In other instances, they can operate as a "lone wolf" terrorist without being tied to any known terrorist group, a bit like a Middle Eastern version of a solitary Right-Wing Militia Fanatic (though as with Right-Wing Militia Fanatics, even a terrorist who isn't taking direct orders from an organization may still be connected to a larger cause if they've been self-radicalized through immersion in that cause's propaganda). Due to a string of large-scale and highly-publicized attacks attributed to primarily Salafist Arab terrorist groups in the early 21st century (particularly al-Qaeda, the Islamic State, and their affiliates), it can come under Unfortunate Implications if handled clumsily.

Some stereotypes associated include the use of shemaghs or black balaclavas, communist-made weapons/gear and verses from the Koran to justify their actions, most prominently including the phrase Allahu Akbar.note It means "God is Great". In reality, its an exclamation used by the majority of Arab combatants, including those who work under formal militaries.

Creators can draw inspiration from Real Life sources and cases where terrorism has occurred in the Middle East, the vast majority of them falling under Islamist groups, making The Fundamentalist a common character among their ranks regardless of their exact "flavour". In the 2010s

, the majority of terrorist deaths worldwide were caused by five specific groups: the Islamic State, the Taliban, Al-Shabaab, Boko Haram, and al-Qaeda.note In particular, its Yemen (AQAP) and Syrian (al-Nusra) branches. All five of these groups are Sunni fundamentalist, and with the exception of the Taliban (Deobandi), all belong to the Salafi jihadism

movement. Sometimes, fictional depictions can also include ultranationalist/Communist (or an odd mixture of both as some nationalist and pan Arab factions were Soviet aligned), Christian fundamentalist groups, Jewish fundamentalist (especially if the story is set in Israel) or some obscure cult. The Shia variants include groups like Hezbollah and it's various Syrian/Iraqi proxies, which is tied into places like lebanon and groups like the Iranian Revolutionary Guard.

Compare and contrast with Arab Oil Sheikh, which is a possible source of how Middle East-based terrorists get help in terms of funding.