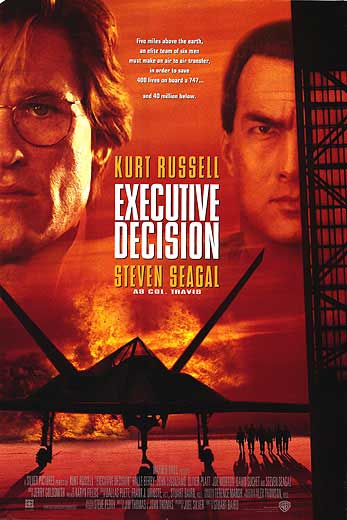 "I hope there's a good movie on this flight."
— Rat
Advertisement:

Terrorists have hijacked a Boeing 747 en route from Athens to Washington, D.C., demanding in exchange for the hostages the release of terrorist El Sayed Jaffa, who had been recently captured and taken into United States custody. It is discovered that the terrorists are actually planning an attack on Washington, D.C., placing a bomb on the airplane that will release a large amount of nerve gas on detonation. A plan is devised to place a small team of United States Army Special Forces into the plane mid-flight to retake control and disable the bomb. If they are not successful, it may become necessary to shoot down the aircraft before it reaches United States airspace, sacrificing approximately 400 innocent passengers to save the lives of hundreds of thousands on the ground. That call is an "executive decision", meaning that it must be made by the President of the United States.

Comparisons with Passenger 57 and Air Force One are inevitable, and while Air Force One is the better known example of a "Die Hard on a plane" flick, this movie actually predates that by one year (both were also scored by veteran composer Jerry Goldsmith). Notable for being the originator of Oceanic Airlines.