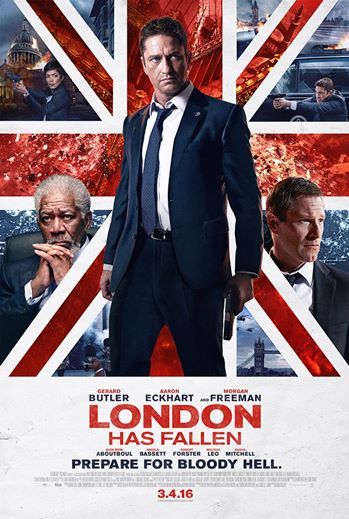 London Has Fallen is a 2016 action thriller and the sequel to Olympus Has Fallen. It is directed by Babak Najafi and, like its predecessor, stars Gerard Butler, Aaron Eckhart, and Morgan Freeman.

After serving under President Asher for two years, Mike Banning is contemplating retiring after he discovers that his wife is pregnant. However, just as he begins to have second thoughts, Asher and Banning learn that the British Prime Minister has died under mysterious circumstances. When Asher and Banning travel to London to attend his funeral with several world leaders, they soon find out that a terrorist cell is targeting the world leaders, and it's up to Banning to save the day once again as the terrorists reign chaos upon London.

London Has Fallen contains examples of:

"To those who threaten our freedom: America will rise up. And make no mistake; we will find you, and we will destroy you."