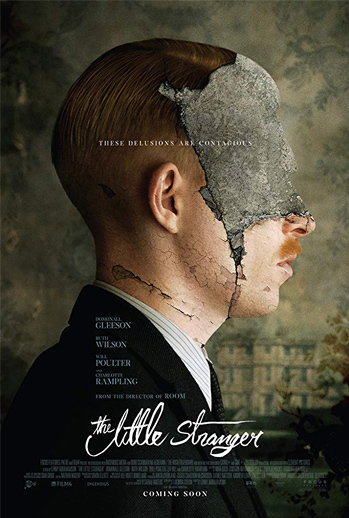 "And perhaps there is a limit to the grieving that the human heart can do. As when one adds salt to a tumbler of water, there comes a point where simply no more will be absorbed."
Advertisement:

The Little Stranger is a 2009 gothic novel by British author Sarah Waters. A ghost story set in a dilapidated mansion in post-WWII England, it centers on a country doctor named Faraday who makes friends with an aristocratic family of declining fortunes; as he ingratiates himself into their lives, unsettling and possibly supernatural events begin to occur at the mansion.

(Or, in short, this is Brideshead Revisited meets The Turn of the Screw).

The novel was adapted into a film in 2018, directed by Lenny Abrahamson and starring Domhnall Gleeson, Ruth Wilson, Will Poulter and Charlotte Rampling.

Tropes in the novel and the movie: