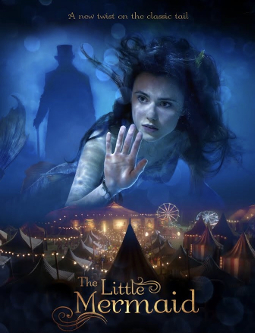 The Little Mermaid is a 2018 fantasy romance film directed by Blake Harris and Chris Bouchard. It is loosely based on Hans Christian Andersen's Fairy Tale of the same name. Chances are, you've probably heard of it because when its trailer went online, it amassed thousands of views from people thinking it was Disney's live-action remake, when it actually wasn't.

A grandmother (Shirley MacLaine) is telling her two granddaughters the story of the titular mermaid (Poppy Drayton). It takes place in the 1930s, concerning a young girl called Elle (Loreto Peralta) who has just lost her parents and is in the care of her journalist uncle Cam (William Moseley). Elle is also sick and upon hearing talks of a 'Mermaid Miracle Juice' in Mississippi, Cam takes her there in search of a story and a cure.