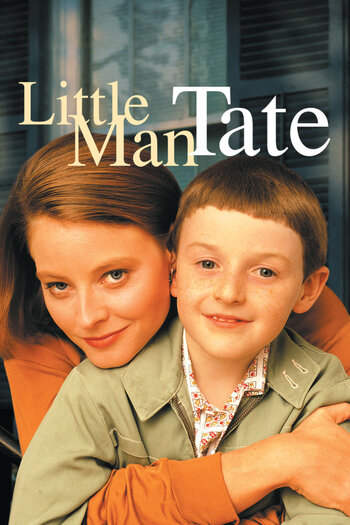 "It's not what he knows. It's what he understands."
— Tagline
Advertisement:

A 1991 American drama film directed by and starring Jodie Foster.

Dede Tate (Foster) is a single mother raising her incredibly gifted son Fred (Adam Hann-Byrd). At just seven years old, Fred can paint, write poetry, play piano, and understand complex mathematics and physics. His extraordinary intelligence attracts the attention of Jane Grierson (Dianne Wiest), a former child prodigy and psychologist who runs a school for gifted children. Jane takes special interest in Fred's case, and tries to convince Dede to admit him to the Grierson Institute so he can develop his gifts in a structured environment.

Though hesitant about exposing Fred to the highly competitive world of academics, Dede eventually relents and enrolls him in Jane's school as well as several courses in college. Fred excels at the institute but can't seem to fit in with other gifted children or with college students twice his age. The separation from his mother starts to take a toll on Fred and Jane is at a loss for how to help him adjust. Dede and Jane must work together to find a way to balance Fred's unique intellectual needs with his desire to have a normal childhood.