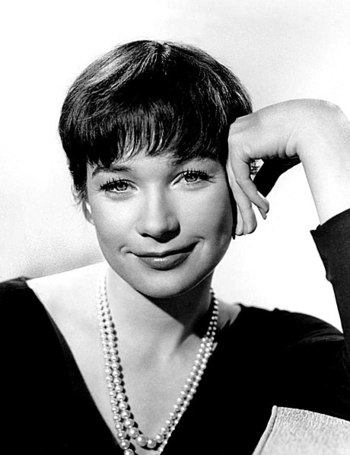 "I think of life itself now as a wonderful play that I've written for myself, and so my purpose is to have the utmost fun playing my part."
Advertisement:

The older sister of Warren Beatty, she made her screen debut in 1955, in Alfred Hitchcock's The Trouble with Harry, and over the years she's appeared in such films as Around the World in 80 Days (1956), The Apartment, Sweet Charity, Being There, and Steel Magnolias. She won the Academy Award for Best Actress in 1983 for her role in Terms of Endearment, and has been nominated five other times. Offscreen, she is well-known for her beliefs in New Age spirituality and reincarnation, and has written a large number of autobiographical works, many dealing with her spiritual beliefs.

She played the character of Grande Dame Martha Levinson, mother of Elizabeth McGovern's Lady Cora Crawley, in the third season of ITV's Downton Abbey. The contrast between her and Maggie Smith's Dowager Countess Violet is generally considered priceless.