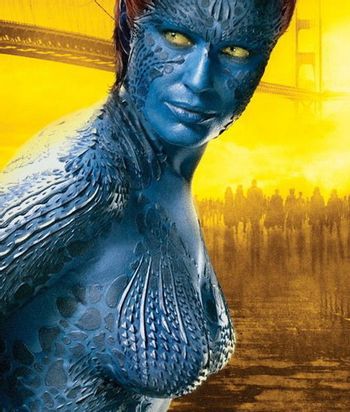 No bra, no problem.
Advertisement:

Sometimes, when you need to create a human-looking alien, a female member of a race of Unscaled Merfolk, or a Draconic Humanoid, bras or simple breasts coverings may look awkward, as she isn't supposed to wear any clothes at all. Well, what should a writer do? The answer is, in this case, covering the mammaries with a natural fleshy appendage, wide enough to hide cleavage and nipples from a view from above. In a few cases, it can also cover a good part of the belly and the waist, forming a shell-like composition. Usually it will be thick enough to hide the nipples underneath, which consequently leads to Nipple and Dimed. Bonus points if the creature either looks like an adolescent or appears in children media.

This trope may be used to avoid Fan Disservice moments.

Subtrope of Clothing Appendage. Sister trope of Seashell Bra and Barbie Doll Anatomy. Compare it to Non-Mammal Mammaries and Exposed Extraterrestrials. Can sometimes overlap with Nonhumans Lack Attributes. Not to be confused with Fur Bikini, though it can overlap in case the character's nonhuman biology is based on a fur/hair-covered mammal (e.g. a Catgirl).