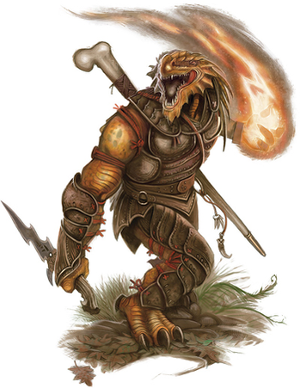 Ask me if I can use Thu'um, I dare you. I double dare you.
"I believe in miracles. After all, the majesty and grandeur of the dragon imbues my blood with magic. Touch my skin, feel the pattern of my scales. Look into my eyes. Feel the magic of my being. Know that I am dragonblood."
— Benesvelk ux Thurirl tibur Elizar, a Dragonborn of Bahamut, Races of the Dragon
Advertisement:

A Draconic Humanoid is a fantastic species that can pretty much be described as the offspring of Lizard Folk and Our Dragons Are Different. Not content with simple humanoid reptiles, the writer decided to give them wings, a Breath Weapon, and/or other draconic features. Another option is to put said dragon features onto an otherwise human-like body.

These may be the descendants of dragons and normal humanoids, or a species of their own.

Note this does not apply to actual dragons that can shapeshift into human forms, unless they shapeshift into a form which is half human and half dragon. See also Human Aliens when they budget-savingly stay in human form when the camera's running.

If suited up in heavy armor, they might be a Dragon Knight.

Sub-trope of Our Dragons Are Different and Monstrous Humanoid. Compare Weredragon, a creature that can change between human and dragon forms. Also related to Demihuman. For kobolds, see Our Kobolds Are Different.