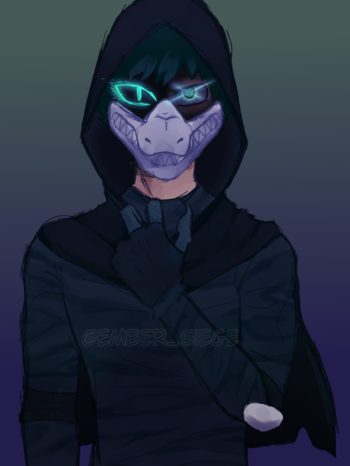 Ten years ago, a four-year old Izuku Midoriya sobbed in the pouring rain as he was held hostage with a razor-sharp propeller blade to his throat by a villain named Blade, who demanded a gun and safe passage out of Musutafu.

The same day, it appeared.

A flash of green light and an explosion of dust heralded the arrival of a massive, serpentine beast that would later be called the Leviathan. It rampaged through the streets, flattening buildings and killing thirty-two people. It vanished as suddenly as it appeared, never to be seen again. The police force searched for months to find the origin of this monster, since no registered Quirk users were known to have such a power. But, after months of searching, they gave up, clinging to the hope that it had somehow moved on or that they would never have to face it again.

In the present, Izuku Midoriya has a useless aesthetic Quirk that gives him fins on the sides of his head. Or at least, that's what he wants everyone to think. Every day is an uphill battle for him to keep the monster inside of him under control. He goes about his life meekly attempting to avoid conflict, squashing his emotions to keep the Leviathan from gaining any traction even as he's tormented for being weak. But no secret can be kept forever. And one day the truth will emerge.

And when it does his world will come crashing down.

Leviathan is a My Hero Academia Fanfic posted on Archive of Our Own. It follows a similar vein to Daymare, which popularized a stream of stories with the premise, "What if Izuku had a Quirk that made him a monster?" Featuring a very different take on our freckled young hero, it follows Izuku's desire to become a hero even as a literal monster within him battles him for control, weighing him down with the guilt of what it has done and the fear of having it released or revealed to the world at large. It doesn't always take itself seriously though, with one of the tags literally being, "I can't believe it's not crack".