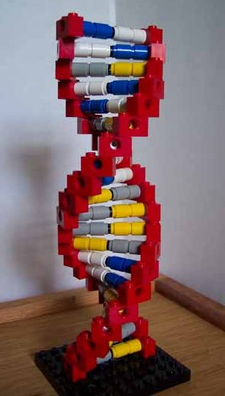 ...oh, now you're just being difficult.
"Remember, genes are not blueprints. This means you can't, for example, insert "the genes for an elephant's trunk" into a giraffe and get a giraffe with a trunk. There are no genes for trunks. What you can do with genes is chemistry, since DNA codes for chemicals. For instance, we can in theory splice the native plants' talent for nitrogen fixation into a terran plant."
— Academician Prokhor Zakharov, Sid Meier's Alpha Centauri
Advertisement:

With LEGO Genetics, you can fiddle with DNA wherever you like, intentionally or accidentally, and all the cells will change overnight (if that). Just wake up and presto! Wings! Fur! Gills! Hulking muscles! Giant brain! Stem cells! You don't even have to eat the equivalent of your entire body mass to create all those new body parts; the old cells and the new ones are just cobbled together like LEGO bricks. That part is usually Hand Waved if not lampshaded.

Instances of genetics in media tend to fit the "dumbed down" perspective on genetics taught to middle/high schoolers. Condensed to a more basic level, curriculum often has it summarized as:

Since reality can be boring and most writers can't be bothered, you can expect a great deal of frivolity in the media, with writers either fitting the above concepts or bending the plot further from accuracy. As such, expect scenes where patients "evolve" or "devolve" by radiation exposure while an expository scientist throws around Technobabble near graphics of a spinning, glowing double helix.

It should be noted, however, that gene therapy, which involves the alteration, addition or removal of existing genes in an adult organism, really does exist, but it's currently not permanent in most cases. They're working on that, though. The Hox genes

are also an interesting reflection of this trope in real life, as these primitive "blueprint" genes do in fact seem to serve as the 'LEGOs' the genome uses to assemble a body, whether that be a spider, a bird, or a llama. See the Analysis page for more on those.

In fictional media, look for characters ending up an Animorphism or a Half-Human Hybrid because Genetic Engineering Is the New Nuke. Related to Chemistry Can Do Anything and Magic Genetics. See also: No Biochemical Barriers, Unstable Genetic Code, and Bio-Augmentation is a likely application.