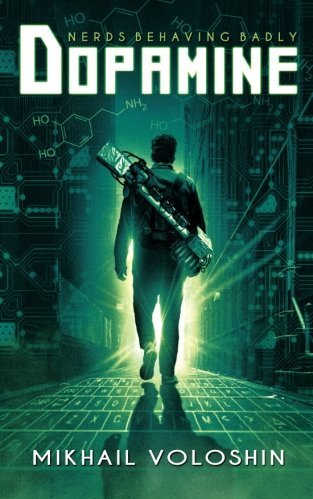 Dopamine is a 2014 novel by technologist and part-time author Mikhail Voloshin. It's a modern-day adaptation of the Cyberpunk genre that effectively takes place in the real world of the 2010s.

Dopamine rests on the realization that many William Gibson style tales from the 1980s and 1990s — stories about omnipotent megacorporations, about weaponized computer viruses and a citizenry that conducts almost all of its interaction in a digital proxy world, about wily purple-haired computer hackers zooming on motorcycles through the neon-lit nighttime streets of gritty metropolises on missions to bust through firewalls, crack encryption algorithms, and thwart artificial intelligence constructs — essentially describe the actual reality in which we currently live. With the existence of Google, Big Data, 4G cellphones, the NSA's PRISM program, Edward Snowden, Wikileaks, Anonymous, and Cyberpunk 2020 having turned out to be still far away in the future as of January 2020, the genre of cyberpunk literature is essentially redundant; there is basically no point with reading Snow Crash, when the good ol' New York Times in 2020 can do the same job of painting a bleak cyberpunk future being reality today, here and now.

Dopamine, therefore, is driven by a plot that sounds like something out of a Shadowrun or Cyberpunk 2020 source manual. Yet it reads a bit like a Tom Clancy tech thriller; describes technology that is not only common but almost downright mundane; and depicts thoroughly researched real-world hacking techniques, often in painstaking and scarily accurate detail.

At first, Danny and his team of semi-competent geeks relish the chance to play-act as cybercriminals, but they soon discover they aren't the only ones interested in the secretive biotechnology firm. Their ill-timed computer shenanigans interrupt an armed break-in of the laboratory by the Russian mafia, and Danny lands squarely in the crosshairs of a local cocaine kingpin. He soon finds himself hunted by drug dealers and exploited by Machiavellian corporate moguls in a battle over a test tube of genetically engineered bacteria.

With the help of Tina, an amateur microbiologist desperate for professional recognition, Danny must use his technical skills to elude his powerful pursuers — and, with luck, even beat them at their own game.