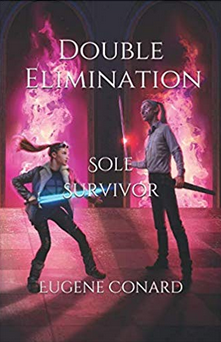 In the year mankind denoted as 2072 AD, a god fell from the heavens, bringing with her magic, a powerful tool that can be used to rewrite reality at the wielder's will. With this new power, the world descended into chaos. After fifty years of war and fifty years of peace, the worldwide government created a fighting tournament for the world's deadliest warriors, wizards, and weirdos. The idea was simple. Instead of armies killing and destroying each other, mankind would channel its destructive impulses into one on one duels. The prize for this tournament was simple: One wish, magically granted by the god. A prize that most people are willing to kill for. In 2192 the first tournament commenced. Due to its success, humanity decided that a new tournament would be held every three years. Our story begins in 2234, at the beginning of the Fourteenth Triennial Golden Valhalla Tournament. The final tournament.
Advertisement:

Double Elimination is a Science Fantasy Novel Series by Eugene Conard. The series is centered around the Golden Valhalla Tournament, a fighting tournament for the deadliest people on the planet. The first book, Sole Survivor, was released in 2018. A sequel, titled Double Elimination: The Machine, has been announced.

Double Elimination As A Whole Contains Examples of: