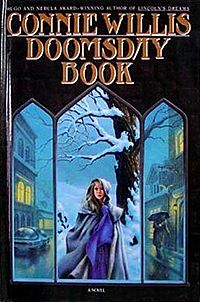 In 2054, historians are using time travel in order to better understand the past. Kivrin Engle is one such historian, a dedicated one too. She's taken lessons in Middle English and Latin, learned how to make textiles, gotten her hands dirty, and much more in order to better fit in with Middle Age civilians. Her mentor, Dunworthy, is vehemently against her going, never letting up his warnings about cutthroats, thieves, and rapists. Even as she prepares for the drop, Kivrin keeps downplaying the danger up until she's finally in 1320.
Advertisement:

Or at least, that was the year she had planned to travel to. Soon after Kivrin's departure, Badri- the tech who oversaw the drop- tries to warn Dunworthy that something is wrong, but falls seriously ill before he can say what. Badri is the unwitting host of a new virus, quickly becoming the center of an epidemic. Within hours, the college where Dunworthy works becomes filled with the sick and dying. As he tries to help keep the epidemic under control, Dunworthy frantically works out what went wrong with the drop and if he can even get Kivrin back.

Meanwhile in the Middle Ages, an ill Kivrin is rescued and taken to a small time noble manor. After being nursed back to health, she becomes a nurse to an energetic young girl called Agnes and her stern older sister Rosemund. She manages to record everything she sees and does into a cleverly disguised corder. She calls it her Doomsday Book, named after Dunworthy's pessimistic warnings. However, her mentor wasn't just telling her such things for the sake of his own peace of mind: something is off about the year Kivrin has entered. If she doesn't figure out what year she traveled to in time, it won't only be her life that's in danger.

Doomsday Book is a 1992 time travel novel by Connie Willis. It takes place in the same universe as To Say Nothing of the Dog, Blackout/All Clear, and the short story Fire Watch.