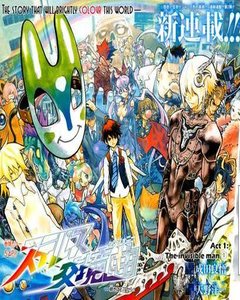 A 20 chapter manga published in Shonen Jump and Weekly Shonen Jump US, written by Ryogo Narita (of Baccano! and Durarara!! fame) and drawn by Yoichi Amano.

In a world where elves, dwarves, and invisible dragons live in harmony inside a metropolitan city, Jig sets out to find someone or something that can unleash the curse that he carries on his back. As he attempts to survive in the city of Jinbocho, a city filled with fantastic secrets and organizations, he encounters many powerful individuals who set out to either destroy him or save him. Will Jig be able to discover the true secret of his curse, or will it lead him to his own demise?