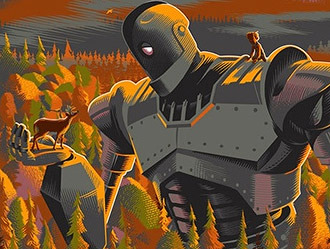 Friend to All Children. Lover of the Forest Animals.
Just don't bring out a gun in front of him.
"He has to be nice, he's a giant! If he wasn't nice he'd have villagers coming after him with torches!"
— Doug, The King of Queens
Advertisement:

He's big, muscular and angry looking. He might even be an actual monster. People are often fearful of him. But he's got a heart of gold. He loves children and puppies, and frequently abhors unnecessary violence. He is often rather intelligent, level-headed and analytical, a voice of reason in the group. He probably has a few unexpected hobbies. He's the Gentle Giant. However, when push comes to shove, he's great to have on your side in battle.

This is a reversal that has become an archetype in its own right. We are all used to thinking of big people and giant creatures as frightening and mean. Starting back as far as Frankenstein's Monster or earlier, the seven-foot shambling hulk of a man is almost always gentle inside, and misunderstood by society at large.

This archetype is so common it's probably more surprising for the musclebound hulk to turn out to be an irreconcilable jerk or bloodthirsty killer. The old subversion has become the new norm.

Two out of three examples of The Big Guy from the Five-Man Band are likely to be this type; he is their Class 2. (The other is usually a Genius Bruiser.) Sometimes has a much smaller friend and companion.

The typical Gentle Giant is quiet and, while not "book smart" (and sometimes outright stupid), is usually closer to Earth. An occasional subversion of this is to make him the most intelligent member of the group, either as a scientist and tech guy or as a cynic. He may also like things that other guys will think of as "un-manly", which is one good reason not to push him too far. He will push back.

Compare The Grotesque. Contrast The Napoleon and Killer Rabbit. See also Bruiser with a Soft Center, for which being tough and badass is the default, and the sensitivity may be a Hidden Depth. Frequently overlaps with Face of a Thug and sometimes Lovable Jock. Not to be confused with the British progressive rock band.

Example of:
Friend to All Children