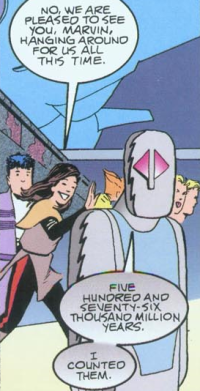 A mild tragedy for a time traveler, particularly applicable to the longer-lived variety.

A sort of breakdown of Meanwhile, in the Future…, The Slow Path is what a character travels down when they use time travel to experience much more time than the other characters in the story.

This typically takes one of two forms: a character can use time travel to take a "time out" from the story at large, returning when they are good and ready (or simply manages to blunder their way back home). Alternatively, a character might be left behind by time travel, and therefore be forced to return to the present by "going the long way." If a Human Popsicle or a longer-lived/immortal being is not involved, this can be particularly tragic, with the character forced to burn up a sizable chunk of their vital years. Or worse, they might have been sent far enough into the past that they won't survive the "return trip" at all.

If a time traveler gets stuck experiencing this trope for a very long time from the relative view of another time traveler, and yet does not act or behave any differently can be considered a case of Out of Time, Out of Mind. It's possible he may Go Mad from the Isolation, which is bad, unless he also grows Bored with Insanity.

The question of why the slow-pathed hero doesn't show up in their own previous adventures to lend a hand is generally addressed by the dangers of the Temporal Paradox, depending on which flavor of Timey Wimey Balls are in play that week (after all, they know all their previous adventures are going to turn out all right as they are). Alternately, they may have been someone who was believed to be another character all along, and was simply waiting for the proper time to reveal themselves.

Of course, if a spaceship is available, traveling forward in time is easy. Just accelerate to as close to the speed of light as its engines can manage, and the slow path gets a good bit faster. Oddly enough, despite Time Dilation being commonly seen in sci-fi stories, it's almost never used to escape from time travel mishaps.

Common M.O. for The Constant. See also Trapped in the Past and Write Back to the Future.

Bender get trapped thousand years in the past, which would be more of an issue if he weren't a robot.

Bender get trapped thousand years in the past, which would be more of an issue if he weren't a robot.