Literature / In the Keep of Time 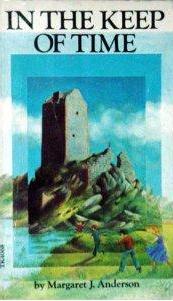 Four English children, two boys and two girls, travel to the countryside to stay with an elderly chaperone. There, thanks to a bit of magic and the curiosity of the youngest sister, the quartet is sent through a Portal to another world, where they have all sorts of adventures...

No, this isn't The Chronicles of Narnia, despite the similarity in set-up, though it may possibly be an Homage. A children's fantasy book by Margaret J. Anderson, it tells the story of Andrew, Elinor, Ian, and Olivia ("Ollie"), and how when their parents decide to go on vacation in France and leave their children with their aged Aunt Grace in Scotland, magical adventures befall them thanks to a key and the ancient ruin of Smailholm Tower. Lessons are learned, though not as many as would be expected for a children's story written in the 70's, and stronger family bonds are formed, as the children slip back and forth between the past and the present (and even the future).

For its time the writing is surprisingly good, with a great deal of research and care, believable characterization, some poignant and effective moments, humor, and an unusual approach to Time Travel that not only plays with genre tropes but leaves the reader with a slightly unsettling scenario that truly makes one think. Has become something of a Cult Classic due to its age and out-of-print status.