Literature / In the Realms of the Unreal 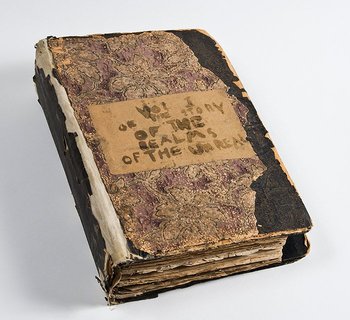 A novel known primarily for its length, its illustrations

note 99% benign and enchanting, 1% Nightmare Fuel, and its writing process* in tiny, tiny handwriting over decades, then neatly typed and bound into massive handmade books, Henry Darger's The Story of the Vivian Girls, in What is known as the Realms of the Unreal, of the Glandeco-Angelinian War Storm, Caused by the Child Slave Rebellion tells the story of a fictional war between the Christian nation of Angelinia and the militantly atheist nation of Glandelinia. The Vivian Girls are the seven daughters of Robert Vivian, emperor of the Catholic kingdom Abbieannia. The girls are both leaders and inspirational, saint-like figures rallying the troops.

The subject of this

Documentary, which also goes into Darger's life. A second film, Revolutions of the Night

, released in 2012, gives more detail about his background (more about this film and its evocation of Darger as he really was in this essay

), which may help contextualize the origins of the events and themes in the narrative.

You may read selections from The Story of the Vivian Girls in the Realms of the Unreal, and the entire The Vivian Girls in Chicago, Henry's weather journal and The History of My Life the Illinois State Library website

Tropes applying to In the Realms of the Unreal