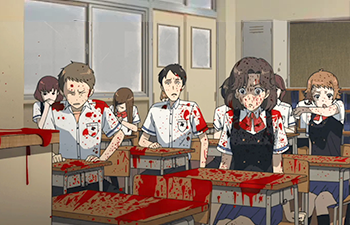 The Medic: Did all this blood come from your eyebrow and your head?
Captain Phillips: No, not all of it. That’s not mine!
— Captain Phillips
Advertisement:

Want a surefire way to Break the Cutie? Well, nothing causes mental trauma quite like being covered in the blood of another person. Not only that, but the image this creates is so arty that it can let you get away with putting lots of violence in your film and still have it called True Art.

Can be a Gory Discretion Shot, although not always — the most common way it will play out is that someone will have a gun to their head, ready to commit suicide. The innocent one begs them to stop, we hear a gunshot, and then see the blood hit the face.