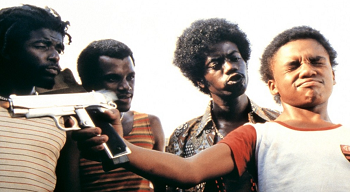 "Taking the kids from our districts, forcing them to kill one another while we watch—this is the Capitol’s way of reminding us how totally we are at their mercy."
— Katniss Everdeen, The Hunger Games
Advertisement:

Having to kill another human being is traumatic enough. But when a child has to do it, either in defense of themselves, in defense of another, or being forced at gunpoint or swordpoint themselves to do it, the effect can be all the more horrifying. The fact that even children are forced to hand out violence to defend themselves adds to the cynicism of a setting. Children having to kill on a regular basis is a red flag for a Crapsack World.

The reasons for a child having to kill vary. They may have been attacked by someone and struck out in defense: they just happened to have the right thing on hand. Equally, they may manage to get the drop on someone who is trying to murder a parent or other carer. As mentioned before, they may be forced to do it, either as some form of Training from Hell or just from a complete sadist. This will be made all the more tragic if it was someone close to the character: a friend, relative or, worst of all, their own parent or even parents. If this is in a character's past, it will be a dark and troubled one.

Of course, such an experience is Harmful to Minors. Can lead to an even more warped form of Blood-Splattered Innocents. Often the cause of a Dark and Troubled Past. Child Soldiers must do this as a matter of course. Kid Hero stories with a particularly dark tone may also have this as normality for the setting, especially if that setting is a Teenage Wasteland. Tyke Bombs can become this if said Tyke bomb is forced to kill before it can be defused.

Of course, this goes along with Child Soldiers.

Note: Children who kill when they don't have to aren't this: that's some form of Enfant Terrible.