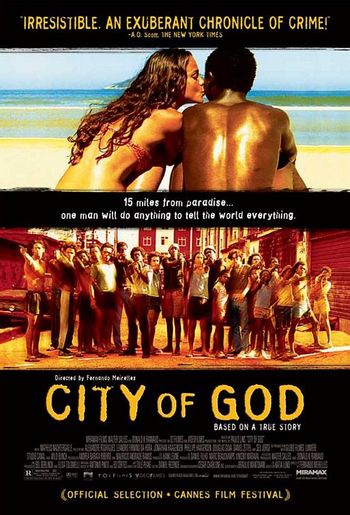 On the edge of Rio de Janeiro, in The '60s, a housing colony is built to replace the favela shantytowns and house the many refugees of flooding. A bleak but not horrible place, its people live on the edge of society: the kids growing up there engage in petty crime that grows ever more severe as the years go on. By The '70s, the children have become teenagers and the colony has become like the decaying shantytowns it was meant to replace.

Buscapé (Rocket) grows up alongside teenage gang members but limits his law-breaking to petty theft and smoking weed. He wants to be a photographer when he grows up, and to move far away from the ever-worsening Cidade de Deus. The kids who grow up in the crime-ridden Cidade de Deus turn to gangs, and the gangs turn to drugs to make money. As the biggest gangster, Zé Pequeno, declares war against the other street gangs in the slum, Buscapé can't help but get involved as violence explodes on every street. In the end, he realizes that he must leave as Cidade de Deus collapses completely and has become an all-out war zone.

The film City Of God (Cidade de Deus) is based on a book by the same name by Paulo Lins (which in turn is based on some true events). After the film became popular and won awards, a TV series spin-off was made called City of Men. Not to be confused with the book "The City of God" by Augustine of Hippo.