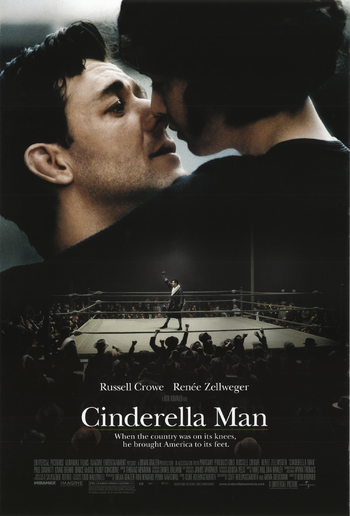 Cinderella Man is 2005 drama film directed by Ron Howard, starring Russell Crowe, Renée Zellweger, Paul Giamatti, and Craig Bierko. It loosely follows the story of Real Life boxing champion James J. Braddock, aka "Cinderella Man". It was an uplifting underdog story, set in a time when the country very much needed one.

The movie begins during what should have been the upswing of Braddock's career in the late 1920s. Braddock (Crowe) has it all — a successful boxing career, a pretty wife, Mae (Zellweger), and three beautiful children. Cut to several years later, we find out that Braddock was forced to abandon his boxing career after suffering a broken hand. His wife saw this as a both a blessing and a curse, as she feared for his safety in the ring, but knew boxing was the best way for Jim to support their family.

As the Great Depression hits, Braddock is forced to do manual labor, working on the docks to (barely) support his family, who live in extremely poor conditions. At one point, he takes public assistance (a great source of shame to him) to pay his electricity bill, allowing his kids to stay in the house. After another boxer cancels at the last minute, Jim's old manager Joe Gould (Giamatti) asks him to fight the number two contender in the world. There is little chance Jim will win, but this is a Ron Howard film, so...

Jim wins the fight, thanks to new-found strength in his non-broken hand from his work on the docks, coupled with an uncompromising drive to support his family. After the stunning upset, Gould and Braddock discuss a full-time return to the ring. Mae is extremely angry with Joe for trying to profit from Jim's willingness to put himself in danger. She is surprised and humbled to see that Joe's belief in Jim is so strong, he and his wife have sold almost all of their possessions in order to pay for Jim's training.

As Jim continues to win fights, he moves closer to fighting the defending world champion, Max Baer (Bierko), an arrogant and dangerous opponent in the ring. Jim's rags-to-riches story captivates the nation, earning him the nickname "Cinderella Man" and the fight is billed as a David vs. Goliath. Max Baer taunts Jim at every turn prior to the fight, attempting to humiliate him publicly. The boxing commissioner insists on showing footage of two of Baer's previous fights, where each boxer died from injuries sustained in the ring, so Jim is aware of what is at stake.

But Jim's resolve remains strong and he insists on fighting, because he feels a duty to all those who believe in him. On the night of the fight, Mae can not even bring herself to watch in person, or listen on the radio. In the end, of course, Braddock wins a stunning and hard-fought bout, enabling a Happily Ever After ending. But it is a Ron Howard movie, so this was to be expected.

Definitely not to be confused with Cinderella or the Eminem song of the same name. Rosemarie De Witt, who plays the Braddocks' neighbor Sara, is the real Jim Braddock's Real Life granddaughter.