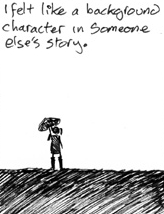 A Useless Protagonist is exactly that: a Point of View character who can only watch as more capable supporting characters bust their asses saving both him/her and the world. They may become more badass later on, but they always start as something of a pansy.

Think of it this way: Arthur is The Chosen One, but he is utterly powerless on his own and isn't even a Badass Normal, so he sits around doing nothing. Fortunately, he has Bob and Charlie to protect him, with Bob being the most important heroic force both in combat and in planning, and Charlie acting as his sidekick and, though not being as awesome as Bob, still being very useful. Think of Bob and Charlie as Batman and Robin, and Arthur as some poor schmuck in the story they have to save because he is the living descendant of Jesus, and poses a threat to the Catholic Church simply by existing.

If Charlie is the narrator, then he is the First-Person Peripheral Narrator, because, even though he's incredibly useful, this obviously isn't his story. If Arthur is the narrator, then he is this trope, because he doesn't do anything useful at all. He is not the First-Person Peripheral Narrator, however, because he is The Chosen One and the focus of the plot and action and this is ostensibly his story, even if Bob and Charlie do all the work.

Note that this is not a one-time uselessness due to strange effects, or a long-term effect on someone who requires protection. It's a healthy character with no good excuse for cowering behind their constant savior. The literary term for this is "agency": a character has agency when they act rather than react, when the story proceeds because of their actions rather than through the actions of others. A character with little to no agency has the plot happen to them, with little control over the outcome, while a character with a lot of agency drives the plot: their actions force other characters to act or react.

Another thing to think about is that this is not a place for "weak" protagonists. "Useless" entails someone who is completely ineffective in all story-important aspects. Some protagonists that lack physical strength are useful by being brilliant in some other fashion, a la The Chessmaster.

Contrast Pinball Protagonist where a character does have useful skills, but is incapable of acting on their own initiative because stronger characters have set the plot on rails. Not related to a Spotlight-Stealing Squad taking focus from the lead. Compare Helpless Observer Protagonist.