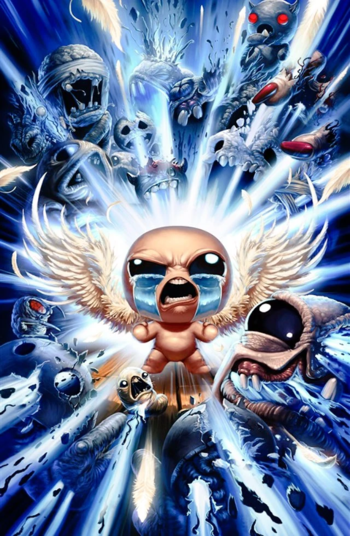 "Jacuzzi was angrier than I'd ever seen him. Which means he cried a whole lot more than usual."
— Donnie, Baccano!
Advertisement:

A character is fighting or screaming or deeply lamenting/angsting, sometimes in a rage that's frightening to behold. At the same time, tears are streaming down the character’s face.

Sometimes this character cries with grief about what just happened that drove the character into the rage. Others show their regret about the harm that they're doing. The trope requires a character more dangerous than a tantrum-throwing child, but the Psychopathic Manchild, Woobie, Destroyer of Worlds, or a similar character may be extremely physically dangerous while being the kind of emotionally immature person who cries while he throws a (possibly well-provoked) violent temper tantrum. Occasionally they are just overwhelmed by fear, physical pain, and plain horror of battle. It's hard to tell.

Either way, the fight often seems like a last resort to overcome the pain and lash out against this cruel world as a whole. It is usually followed by Heroic BSoD. In some cases, this can accompany a Villainous Breakdown.

Compare Roaring Rampage of Revenge, as that is huge motivation and invitation for this. Compare Screaming Warrior. Contrast Tranquil Fury and Dissonant Serenity. See also: Manly Tears and Broken Tears.

The Wrath of Josh Nichols

Josh bursts into a fit of tears and a fit of rage after Jake makes him late for an important test.

The Wrath of Josh Nichols

Josh bursts into a fit of tears and a fit of rage after Jake makes him late for an important test.