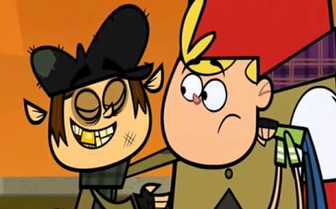 "Please, the whole street is my home. Spare change would be nice, though."
"This only goes to show what little people can do!
And little people know when little people fight,
We may look easy pickings but we've got some bite!"
— Gavroche, Les Misérables, "Little People"
Advertisement:

The Artful Dodger is like the Street Urchin, except that instead of being The Woobie that makes you want to take them up in your arms and care for them, they seem perfectly happy to take care of themselves. Oh, they'd let you take them home, just don't expect them (or any of your valuable possessions) to be there the next morning. In Real Life, a child who lives on the streets experiences horrors most people could not even imagine, but in some fictional works, a child on the street lives a happy-go-lucky life and practically thrives (often no longer visibly terrified thanks to having long since been Conditioned to Accept Horror).

They are exceptionally Street Smart, and can take care of themselves better than most adults, being a bit more experienced in the field. They're usually a criminal. Not the poor, innocent child who hates having to steal out of desperation, but the whip-smart trickster. The adult protagonist may feel sorry for them and try to help them at first, but it will usually turn out that the adult actually needs their help. They often have some sort of unique knowledge or skill that the protagonist needs in some circumstance, such as how to access any part of the city through the sewer system.

They'll probably start out as a pest, but they'll turn out to be one of the Hero's most powerful and stalwart allies when the chips are down. They're characterized by sarcasm, cynicism, skepticism, incredible resourcefulness, and a charming fascination with violence, but in the end, they's likely to succumb to the temptation of family life with the Hero, even if their life on the street was clearly more Awesome. They're also fairly likely to die by Taking the Bullet for the Hero. In this case, the Hero will retroactively adopt the Kid, for instance by putting their own surname on the Kid's tombstone. Can grow up to become a Satisfied Street Rat, but the Dodger is more of a trickster where archetypally the Street Rat is more of a cutthroat.

If the Artful Dodger is working for someone (as the original did), expect their boss to be some variety of The Fagin.

Usually male, but there are a few exceptions.