Literature / Beyond the Western Sea 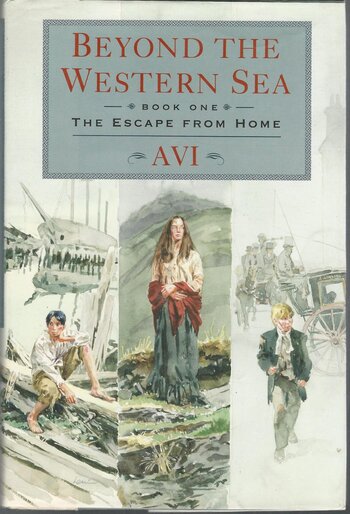 County Cork, 1851. Soldiers representing Lord Kirkle arrive to tumble the village of Kilonny. Luckily for Patrick O'Connell, 12, and Maura O'Connell, 15, their father is living in America and has sent his wife and children tickets to join him. At the last minute, Mrs. O'Connell refuses to board the ship, forcing Maura and Patrick to continue without her.

In London, Laurence Kirkle, 11, is beaten by his brother Albert for an offense he didn't commit. He takes a thousand pounds from his father, not knowing how much it is, and runs away to Liverpool. On Laurence's trail are Mr. Clemspool, a kidnapper hired by Albert to take him to America, and Mr. Pickler, a private detective hired by Lord Kirkle to bring him home.

In Liverpool Patrick meets Laurence, and the boys form a plan to stow Laurence on the ship the O'Connells are taking to Boston.

Beyond the Western Sea is a homage to Victorian serials, particularly those of Charles Dickens and Anthony Trollope, and uses several tropes popular in that era.