Literature / Afternoon of the Elves 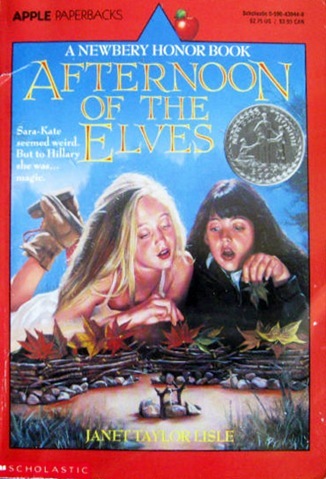 If you don't believe it's elves, that's your problem. I know it's elves.

“Even without being believed, magic can change things. It moves invisibly through the air, dissolving the usual ways of seeing, allowing new ways to creep in, secretly, quietly, like a stray cat sliding through the bushes.”

Hillary doesn't believe all the mean things she hears about Sara-Kate. Sure, she wears weird clothes and she lives in a dumpy house, but if Sara-Kate's as bad as everyone says, how could she take such good care of the elf village in her backyard? She and Hillary spend hours fixing the tiny stick houses and the miniature Ferris wheel so the elves won't move away. But as Hillary is drawn further into Sara-Kate's world, she learns there are other mysteries besides the elves. Why doesn't anyone ever see Sara-Kate's mother? And why isn't anyone allowed in her house?

Afternoon of the Elves is a children's novel by Janet Taylor Lisle, about unlikely friendship, class differences, the power (and limits) of imagination and ingenuity in the face of poverty, and finding magic in the most unexpected of places (and people). It was a Newbery Medal Honor Book in 1990. Given that the plot pivots on a major twist, expect lots of spoiler text below.