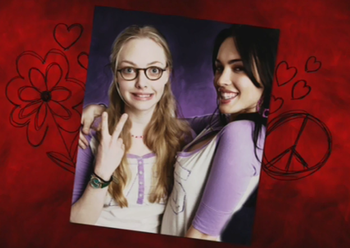 Social cliques are Serious Business in most shows aimed toward kids 9-to-18. It's impossible that the Jerk Jock would hang out with a total dork for non-ironic reasons, nor could the Alpha Bitch be best friends with the Cute Bookworm. Many shows — especially during the 90's and the turn of the millennium — showed how narrow and high are the standards for being popular and the losers repetitively trying — and failing — to impress the popular kid. It goes beyond that by showing that even talking to those dorks could make a character go down in the Popularity Food Chain.
Advertisement:

This contrast exists to emphasize both characters by comparison, showing how cool the popular kid is and how dorky their best friend is. Often this trope serves the primary purpose of making the popular kid likeable and sympathetic to the audience because they're risking social judgement and a drop in the Popularity Food Chain by continuing their friendship. This relies on the idea that the less popular character has nothing to lose from the friendship (socially) and only benefits from it.

There are several ways this can come about in a story. The popular character takes control of everything while the loser agrees to everything and works as a subordinate, something that the loser accepts in order to get the attention and popularity that they could have never get by their merits. In more positive portrayals it could happens because the Popular Kid does not need to impress their dorky friend in any way, or because the nerd knows that their friend is a kind person after all. Sometimes the cool kid can be curious about the loser, who is cool in their own way. Sometimes they've known each other since childhood and retained their friendship into their high school or college years. Frequently, if the Cool Kid is a girl and the Loser is a boy (more rarely the other way around), they may be very good friends but the Loser is secretly in love with his popular best friend.

Sub-Trope of Odd Friendship. If this gets lampshaded, it's Loser Friend Puzzles Outsiders. This can be caused by a Bully Turned Buddy scenario, with the bully being the "cool" friend.