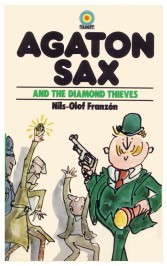 Agaton Sax, in his first UK appearance.
The Agaton Sax books are a series of Swedish detective stories for children and childish adults. They concern the adventures of Agaton Sax. He's a pleasant, rotund little man, who makes a living writing, editing and publishing Bykopingsposten, the world's smallest newspaper, which only has four pages and comes out three times a week. As is the tradition for literary protagonists in detective stories, though, he frequently finds himself bumping into criminals, mysteries and all sorts of adventures. These adventures take him to all kinds of different countries, some fictional and some real, but luckily his excellent skill in languages means that he never needs to worry about communication with people.
Advertisement:

He's not alone in his troubles, either; he gets help (well, sort of) from inspector Lispington of the Scotland Yard and his beloved and clever dachshund Tickie. Together, they never fail to save the day and thwart the plans of any counterfeiters, jewel thieves, embezzlers and other criminal elements that haunt the world.