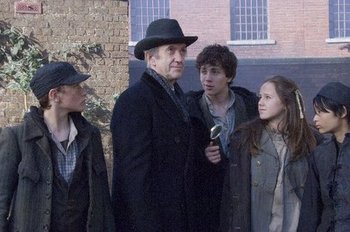 Sometimes, a detective or police officer, no matter how great, simply needs help from time to time. It's no big deal, really. The Baker Street Regular is that child that finds himself in the situations with the hero, especially the dangerous ones.

Your first run in with the Baker Street Regular is likely while he is searching through the hero's home or office or stealing something to eat because he cannot afford it. If he is not related to the hero in any way, expect him to have no family, except for maybe a sibling or two, but he is almost always the eldest, and almost always male. If he is an orphan, after scratching his back a couple times, expect him to be forever indebted to you and to get you out of a sticky situation in the nick of time, but don't expect him to just leave. You're stuck with him.

After you manage to win the respect of the Baker Street Regular, he will be an invaluable tool and assistant to your group. Life on the street is going to make him able to hear rumors that you won't be able to while you are out on your investigations. He is always good at hiding, especially in situations where the Big Bad is nearby.

The Baker Street Regular is a pun on the Trope Namer, the Baker Street Irregulars, a mob of orphaned street urchins often employed by Sherlock Holmes to gather rumors, spy, and do various odd jobs. In return for their discretion and loyalty he paid what was, to them, an outrageous sum of money.

At this moment there was a loud ring at the bell, and I could hear Mrs. Hudson, our landlady, raising her voice in a wail of expostulation and dismay.
"By heavens, Holmes," I said, half rising, "I believe that they are really after us."
"No, it's not quite so bad as that. It is the unofficial force — the Baker Street irregulars."
As he spoke, there came a swift pattering of naked feet upon the stairs, a clatter of high voices, and in rushed a dozen dirty and ragged little street Arabs. There was some show of discipline among them, despite their tumultuous entry, for they instantly drew up in line and stood facing us with expectant faces. One of their number, taller and older than the others, stood forward with an air of lounging superiority which was very funny in such a disreputable little scarecrow.
— Sherlock Holmes: The Sign of the Four (Doubleday p. 126)
Advertisement:

See also The Informant, who is usually somewhat older and portrayed rather less sympathetically.