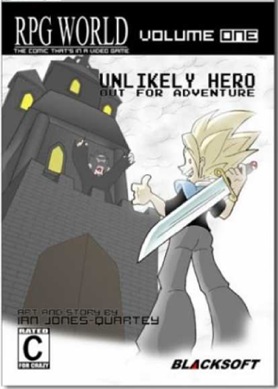 was an award-winning webcomic by Ian Jones-Quartey, part Affectionate Parody, part Homage and part original spin on the idea of a Final Fantasy style console RPG and the characters who dwell in them, as well as the Video Game Tropes and Anime Tropes encountered in such games. One of Keenspot's earlier comics during the rise of webcomics in the 2000s.

The story follows the exploits of a guy named Hero, who sets out on a quest to save the world. Along the way he meets Cherry (a thief he meets as she's mugging a guy at knifepoint), Diane (a harlot who he just randomly picks up while visiting a town), and Eikre (a self-proclaimed ladies man) who join the adventures. Add in many shenanigans with extra characters and tons of lampshade hanging on their rather oddball world.

Seems like a fun setup, and from 1999-2004, the comic held steady, even having a crossover with Adventurers! (with the story titled "Eh It Had to Happen"). But during the series' final years (2005-2007), its fandom had devolved into complaining fanboys who weren't satisfied with how the story was turning out, which in turn contributed to Ian's Creator Breakdown (already manifesting with his studying animation and personal matters at the time in the midst of juggling the schedule for this comic), which wasn't helped by the fact that back then, Ian didn't take the fact the comic had many fans all that seriously. Ultimately all this came to a head when Ian couldn't keep up the updates and just flat-out abandoned the comic. To add insult to injury, he was working on the final story arc of the comic, right when the heroes are on the verge of facing the Big Bad, when he made the decision leaving the series on a cliffhanger that was never to be resolved.

As for Ian, his animation career has flourished. Shortly after leaving RPG World, he co-produced animated shorts called nockFORCE with Jim Gisriel - they can be viewed on their Youtube channel here

. He later parlayed that into being a hired animator for shows such as The Venture Bros. and Adventure Time (even doing voicework, like for Bravest Warriors). He moved on to become creative director for Steven Universe (where the show's protagonist has Hero action figure) before eventually leaving to work on his own series OK K.O.! Let's Be Heroes.

Ultimately this led into RPG World finally getting a belated ending almost 15 years after that last update, in the form of a television crossover between the comic and OK K.O.! Let's Be Heroes, entitled "A Hero's Fate." The episode premiered on September 29, 2017, with Michael Sinterniklaas playing Hero. Due to positive reaction to the episode, Ian uploaded the one-page ending for the series from ''OK KO!'' to his tumblr

on October 4, 2017, finally giving fans a proper close to the comic once and for all. note Sorta, it doesn't wrap up all the story lines of the series. But hey, close enough.

On the 19th of June, 2016, a fan revival (called, funnily enough, "RPG World: Fan Revival") was started by two fans. It can be found here

. While it unfortunately went into a hiatus of over a year and a half when the author had trouble keeping up the updates, it returned on July 31, 2018.

In the "real world":

In the game world:

Not to be confused with RPG Mechanics 'Verse, which is when the setting of a non-interactive work functions like a role-playing game (usually of the Eastern RPG or Tabletop RPG variety).

This webcomic displays examples of: